Discount only on Tuesdays, Wednesdays and Thursdays.

Moro lies at the heart of the lively pedestrianised street, Exmouth Market, in Islington. Known for its award-winning Moorish cuisine, the restaurant is popular not only with diners, but with those who come in to enjoy tapas, which are served throughout the day. It was an unusual route which led to the establishment of Moro in the spring of 1997: two cooks, Samantha and Sam Clark, shared a desire to discover the abundant flavours of the Southern Mediterranean. They married, bought a camper van and set off on a three month journey. They drove through Spain, Morocco and the Sahara, learning, observing and tasting along the way.

As they travelled, the two Sams experimented with local ingredients on their small gas hob, gleaning as much information as they could about different regional cooking, and the varying techniques used. Armed with stories, passion and ideas, they brought what they’d learnt back to Britain, and combined their new knowledge with their shared experience of working at London restaurants, the River Café and the Eagle, to create Moro.

The welcome is especially warm and friendly, making one feel they really are pleased to see you. Inside it is modern, light and airy. Comfortable chairs and fresh flowers on the tables. We began with a glass of delicious Tio Pepe en rama – an unfiltered sherry with lots of flavour. Starters were a Mussel and Prawn Salpicon salad, subtly dressed and full of flavour and a seared pigeon breasts with caramelised chick peas and cinnamon. Both delicious and really interesting – accompanied by a further glass of that lovely sherry. They have a huge wood fired grill in the kitchen, so many of their dishes are cooked on this. We chose Charcoal grilled lamb with slow cooked green beans, farika, almonds and seasoned yoghurt and Wood roasted mackerel with koshary, crispy onions, chopped fresh tomato and chilli. Fantastic lamb, tender and barbequed in flavour with a scrumptious bean and farika mixture. Moist, perfectly cooked mackerel and delicious accompaniments. Two glasses of Sami Ghosn’s Massaya Silver Selection were the perfect accompaniment. Gosh, that wine is fantastic! Good coffee. Superb, friendly, informed service. 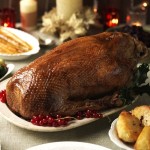 We have virtually every type of poultry and game imaginable at our fingertips. We have been buying from the same goose supplier for more than thirty years. His geese can be seen free-ranging in deepest Dorset until shortly before Christmas. They are wonderfully finished geese, of a quality far above that which you would normally see; and their flavour and tenderness is always superb.  If you want to be different, why not spoil yourself with a goose this year?

However, if a turkey is your bird, our turkey supplier produces a relatively small number of happy, un-intensively reared turkeys. They are plump, moist and tender, and again are really beautifully prepared. They also grow top quality free range Bronze Turkeys. They’re a bit more expensive and a bit smaller than ordinary turkeys, but they are slightly different from the norm, and maybe a bit moister. Those who had them last year thoroughly enjoyed them.

We always hang our Christmas poultry to ensure its flavour and tenderness. It really is a different product altogether from the mass-produced bird, as those of you who regularly buy from us will testify. Turkeys, especially Bronze ones, are always in great demand. If any of you know what you are going to need in the way of turkeys, the earlier you order it, the more likely you are to get exactly what you order! Turkeys and geese are traditionally sold “long-legged weight”, however to make it easier for you we are doing it net weight after dressing from now on.

If a goose or a turkey is too big for you, why not try one of our Barbary Ducklings? We have them small enough for two people or big enough for four or five. And they really are as good a duckling as you’ll get, with a particularly meaty breast. We get them in from France in the middle of December, freeze them immediately and have them available for you to thaw out yourselves. We dare not risk ordering them from France at the last minute as we have been let down in the past. (We also do this with the Guinea Fowl, large corn fed chickens and free-range chickens).

Most of our game is shot in Dorset (but not the Grouse which come from the Borders), then hung and prepared either by us or locally. Nowadays, people don’t like to hang their game as they once did – until the neck broke! We hang ours for about a week to ten days which tenderises it and gives it some gamey flavour. If you like your game particularly gamey, just ask us to hang it for a bit longer, but give us some notice! Pheasant Breasts and Pheasant thighs (ideal for making your own confited pheasant) are now available.

Best newcomer was the Sixteen Ridges Pinot Noirs, red, white and rose. They are made on the Worcestershire/Herefordshire borders from Pinot Noir grapes planted on a south-facing site thought to have been used for viticulture as far back as the Romans. The big advantage is that they are wonderfully weak – only 11%, a thing which is so hard to find nowadays!

It’s more than 15 years since Cloudy Bay took New Zealand Sauvignon from ‘niche’ to ‘cult’ and since then the world, and the UK in particular, has loved it. This has inevitably resulted in a huge number of cheap imitations – wines which claim similar heritage and quality but which are in fact made in industrial quantities by faceless conglomerates. So in order to make something authentic and worthy of attention, the makers of Dog Point have gone right back to basics.

Dog Point, which is the name of a peninsular, is a fabulous bit of Kiwi terroir managed by two people with 30 years’ combined experience in senior positions at Cloudy Bay. The immense quality of the wines, the result of a personal, careful and hands-on approach of the team (which extends as far as hand picking their grapes, something of a rarity in Marlborough) means that support for the Dog Point operation is not hard to come by. Leading Antipodean wine expert Tyson Stelzer sums it up perfectly: “There’s a consummately crafted dimension to this wine that propels it above the vast sea of New Zealand Sauvignons, a wine of genuine character and interest”. Clearly this is more than a match for Cloudy Bay and we heartily recommend it; as Mr. Stelzer says: “If you buy no other New Zealand Sauvignon…don’t miss Dog Point”! They also do a stunning Chardonnay which is in very short supply….but we do have a case of it if anyone is interested.

The 2013 Vintage in the Southern Rhone

The autumn and winter of 2012 and 2013 were fairly dry. This shortage was offset in the very late winter/early spring by heavy rain. The summer was very dry except for July, when the rainfall was three times the average. From past experience, heavy rainfall in July heavily influences the structure of the vintage, with supple tannins and a very distinctive finesse such as in 1996, 2001 & 2011. Temperatures were mild in the autumn, fairly cool in the winter and spring and normal in summer. During the peak flowering period in the middle of June very high temperatures hit the southern Rhone. This caused a surge in growth to the detriment of flowering. This resulted in heavily reduced fruit set in the Grenache grapes and therefore much lower than normal average yields when picking was over. The wines from 2013’s vintage are much lighter than usual, but they are delicious in a light, fresh, elegant, feminine way which many people will prefer.

The winter of 2010 brought many wet days, which assisted the vines to resist the hot and dry summer that followed. As a result of a warm spring, the vines saw early blossom, allowing one of the earliest starts to harvest ever. However, two rainy days at the end of August were perfect for a cool-down of the berries, offering excellent conditions for the maturation process. The 2011 Ports are very concentrated yet elegant and fresh. In 2011, we have the better of the two worlds: the freshness, elegance and the exuberance of flavours of fresher vintages; and the power and structure of hotter ones.

After a second wonderful summer in a row, although as is so often the case August wasn’t very nice, we had an Indian summer with record lack of rainfall and high temperatures in September and early October; and now it’s really cool and Autumnal. Some have forecast really cold weather ahead this winter. After last year’s exceptionally mild one, we could do with a slightly crisper one.

Sloes are in very good supply in our hedgerows and the blackberries were as good as I can remember them. Our walnut trees had plenty of nuts on them and the squirrels had a wonderful time plundering most of them! The leaves are only just starting to show their autumn colours, and the beech trees in particular are very pretty with real displays of autumn gold. Our Virginia creeper was spectacularly red for a while, but the heavy rain knocked its soft leaves off rather earlier than normal. For once our farmers have had a good year and a good harvest. There has been plenty of forage for livestock farmers too.

As usual at this time of year, we are exceptionally busy at Trencherman’s.  We had a very good trip to North-West Spain and then drove back up through France. For the first time we took the ferry from Plymouth to Santander. This proved a very worthwhile experience as we were in Spain 24 hours after leaving home. Fortunately the infamous Bay of Biscay was very calm. More of our trip later elsewhere but we are ready to offer you yet another fine selection of foods, drink and other ideas for Christmas and the New Year.

We have combined with The Present Finder to send everybody a hard copy of the Newsletter and Christmas Order Forms. Our thanks to them for sponsoring the postage. Do have a look at their catalogue where you will find lots of unusual presents for Christmas.